Babel is the movie of bad decisions. It hurt my brain. I just kept yelling at the television, wanting the characters to do something else. I understand the intelligent side of this film. No one is listening. You are trying with every effort to explain your situation and no one listens. They have their own presumptions or agendas, so what anyone else says has to bearing on their decisions. Still, this movie made me angry. I don’t know if I would recommend this film. It wasn’t bad, I just didn’t find myself wanting to watch it.
at 00:17:00 3 comments: Links to this post

I’m not sure what to think of The Last Legion. It was good. It has some historical accuracies, in terms of the time line. The characters were fun. It was a little hokey sometime and the effects weren’t top notch, but I liked it. I really liked the young actor they had play Romulus. I enjoyed Colin Firth and Aishwarya Rai. Excellent casting choices and good combat scenes. Interesting tie-in to the Arthurian legend too.
at 00:12:00 No comments: Links to this post

I love Hugh Jackman. I mean, he’s Wolverine! I think Rachel Weisz is pretty fabulous too; a good actress. So a movie with both of them should be good, right?

Not that The Fountain wasn’t good. It was just really weird. So many things are happening. You weren’t sure what was real or what was a story. Was it all real? Would you want to live forever? How mad can a man go from grief? What can grief and desperation drive you to do? What would you do for eternal life? Would it be worth living without the one you love? 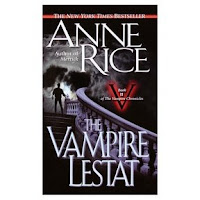 The Vampire Lestat is Lestat’s opportunity to vindicate himself. He gets to tell his side of the story. You realize that he wasn’t as bad as Interview With A Vampire made him seem. There is even a different side to Louis and Armand. I love the depth and change in these characters. So much emotion, love and hate. Lestat and his story is not like what you think it is going to be. It is filled with the unexpected, but still has Lestat’s impulsiveness. His unpredictability makes Lestat unique and a fascinating character.
at 23:33:00 No comments: Links to this post

How does Artemis Entreri fit into the future of Drizzt & the battle for Mithril Hall? He seems to keep popping up. Entreri is such a curious character. Catti-Brie thinks Entreri is akin to the drow, but he hates the comparison. How has this time in Menzoberazzan changed him? I don’t think Entreri is the same man he used to be.

Drizzt has realized his mistake. He also knows now how selfish he was thinking the attack on Mithril Hall was just about him. He is not the only reason bad thing happen to his friends. Mithril Hall is a major underground kingdom. It is a target. Drizzt Do’Urden needs to gather with his friends to defend against impending attack.
Note: Again, not the cover of my book.
at 23:21:00 No comments: Links to this post

Harry Potter And The Deathly Hallows

Bloody brilliant! It was so good! I can’t stop talking about it. I can’t stop thinking about it. What a fabulous end to a fantastic story. I almost cried at one point. Harry is such a magnificent character. They are all wonderful, Ron, Hermione, Ginny, Lupin; such amazing people. You want them to be real. I can’t really say much more without giving too much of the story away. Just read it. It’s not like I expected at all. Harry Potter And The Deathly Hallows is a marvelous end to J. K. Rowling’s series. I want to read it all again!

Harry Potter & The Deathly Hallows, Save 46% at chapters.indigo.ca