I loved Spider-Man: Homecoming more than I thought I would. I heard it was good, really great, but I feel like I've seen SO MANY Spider-Man movies over the years, that part of me was seeing Homecoming just because it was part of the MCU. But nope. The end, the ENDS, were amazing. The different endings definitely elevated the movie for me, but all of it was great. The beginning was hilarious, the middle was fantastic. It was exciting, entertaining, there was character growth, and they used the 3D well. I don't know if I could have asked for more.

Tom Holland was adorable. He was the sweet, goofy, adolescent Peter Parker I wanted. He was a nerd. He was a super-nerd, fully in hero-worship of Iron Man. His relationship with his best friend was great. His crush was lovely. I loved his relationship with Aunt May. The videos he takes were so much fun. I loved how much he wanted to be a hero. For the people who haven't seen Homecoming yet, I don't want to get too much into how much Peter Parker grows, as each event becomes an experience for him to learn from.

Michael Keaton is amazing. AMAZING. For a moment, my mind went all the way back to Beetlejuice. He's so animated, serious, loving, crazy, determined, the Vulture is perfect. You can sort of understand his motivations, but he just seems to let things go to far. He is extreme. Toomes is a complicated character, one you can easily love and hate.

I also have to say how much I loved Zendaya. Her character was hilarious. She was perfectly messy, not a stalker, just observant. She was quiet, intelligent and thoughtful. She appreciated the people who became her friends. I fell for that character.

Also, Flash was the Flash I remember from when I was growing up. He was a complete a$$hole. He was a perfect jerk. His behaviour at the party was perfect. I loved what happened to his car.

I'm nervous but excited about what going to happen to Peter's friend Ned. It'll be something bad, right? No way he's going to be "the guy in the chair" forever. When he was that guy though, and the teacher comes in, and he gives the answer to what he was doing, normally, I wouldn't pay any notice to that particular response. However, my cousin took his daughter, who is a couple of years older than my daughter, to see Spider-Man. She loved it (of course), but she looked at her father and asked what that word meant. I know that this is really vague for people who haven't seen the movie, but I feel like I'll spoil the moment if I give too many details. What I am left with, though, is wondering if my daughter will ask us the same question when she sees the movie.

If you haven't seen Homecoming because you've seen too many Spider-Man movies, don't worry. There's no origin story. There's a reference to how he got his powers, but we are not seeing Peter Parker discover his powers, he's not coming to grips with the change. He has had his powers for a while. He knows how to use them. He made enough of a name for himself already, for Iron Man to have recruited him in Civil War. After that taste of what Spider-Man is like, we get to see an exciting continuation to his story. 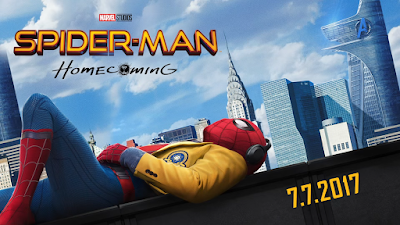 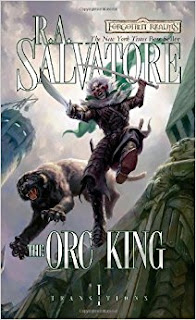 I needed more Drizzt in my life and The Orc King delivered. The amount of time that passed from the end of the last book, The Two Swords to the beginning of this one through me off. I thought the beginning would start closer to the end of The Two Swords, but it is months later. My Hubby reminded me that sometimes, that's just the way it goes with Forgotten Realms novels. (Plus, these are two different series within the Legend of Drizzt series). The Orc King is the first book in Transitions and I am wondering if that series title has more than one meaning. Something happened in the Forgotten Realms/Dungeons and Dragons. The book was published a while ago and my husband thinks it was around when a new Player's Handbook came out. When the D&D roleplaying game gets updated, all of Faerûn can change. R.A. Salvatore sort of refers to the change within the context of the story. The other, (more important to me) transitions are with the characters, the "Companions of the Hall". Catti-Brie is not the warrior she once was, accepting a new role. Wulfgar is making a major change as well. There is a change in the Silver Marches. Dwarves, Orcs, Elves and Humans are all transitioning, changing, and their future is not what they thought it would be.

Can I talk about how much I love Catti-Brie? I've always loved her. I was happy to see how her relationship with Drizzt has progressed. They speak so openly and honestly to each other, it's great. There are no ulterior motives and if one wants to know something, they just ask. Their conversation about Innovindil was interesting. I also appreciated that Catti-Brie had her own growth and change separate from Drizzt. She's forging a new and unexpected path, and I am excited to see where it goes.

I found Bruenor to be frustrating in this novel. I mean, I think I understand all his motives, and I think he was hearing everyone's comments and advice throughout the story, but he was so dismissive. I really like how Hralien balanced him out though. I hope to see more of this elf in future stories. I really liked Wulfgar's change too. I am not sure what role he will play in future stories, but I think he is where he belongs, as though his arc over the last 17 (wow!) books has finally come full circle. I don't know what else that character could do while in Mithral Hall, besides fight, of course.

I wonder what will happen next. I know they will keep looking for Gauntlgrym. I just wonder about the Orcs. I wonder about the Kingdom of Many-Arrows and Mithral Hall. The relationships, the dynamics between races, how it will all change. This is the Transitions series, after all. I expect that there will be a lot of changes coming.
at 22:10:00 No comments: