Ten years ago, I was watching Heroes. I can't believe that show is 10 years old. It makes me feel old. I loved that show when it first started. I loved Peter, Claire, Sylar, Hiro and all the rest. It was a fantastic show in that first season. Admittedly, the following seasons weren't as great and the show got weirder, but I still sort of liked it. I never got around to watching Heroes Reborn though. Was it a mini-series or a first season that didn't get renewed? It's disappointing though, because that show had so much potential.

I miss wondering which new show was going to be a new favourite or if they had the story power to make it more than a year. I've been wondering about other things lately... 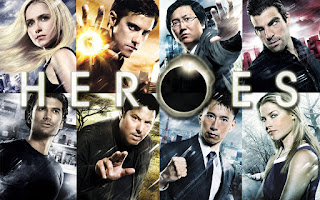 Blast From The Past #11 - Nineteen Eighty-Four

Since I started looking back at my old blog posts, I've been sticking with the corresponding month from 10 years ago. However, I thought I'd change it up for this installment. Instead of talking about The Historian, by Elizabeth Kostova, I thought talking about George Orwell's Nineteen Eighty-Four might be a little more relevant. It's been almost ten years since I read this powerful novel, since I thought things would never be the way they are in Winston's world, but now I'm not so sure, not after the introduction of "Alternative Facts" or the making up of a massacre that never happened. That some people seem to care more about the imagined dead instead of the real dead.

I have shied away from politics on this blog, though I have started to talk about over in my other space. I have wanted this space to be happy. I wanted to talk about books and movies and television, to share things about parenthood and food. I think I might keep this space that way. Leave the politics over there. However, that leaves me with a different feeling. How can I blog about books and things, when all this terribleness is still happening? I haven't stopped reading, I've just stopped sharing. It's almost like feeling guilty for finding something positive to say right now. I know I'm being silly. So, I will still share what I've read or watched and am excited about. I'll share my thoughts too, but I might link over to the other blog more often. Then again, maybe not. I've always let my feelings guide me here, so I'll just have to see where they lead me.