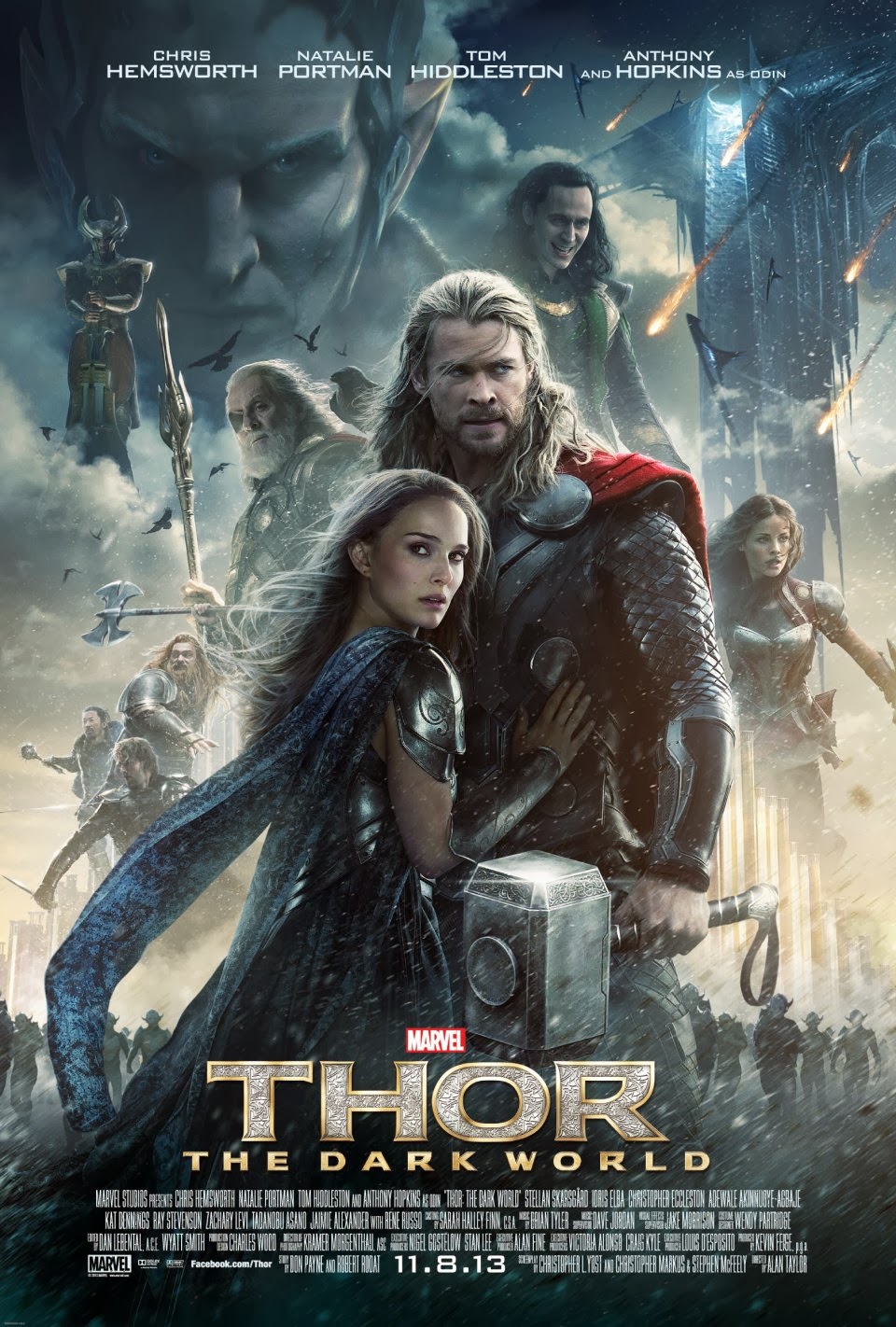 My Hubby and I finally got around to seeing Thor: The Dark World. I wish I could say I loved it.  There were parts I loved, like Thor and Loki in the ship or on the boat.  Jane and the Quantum Field Generator. Erik and Stonehenge. Loki being "righteous." Frigga! As a whole though, I thought it could be better.  I remember reading, when they were filming, that they brought Joss Whedon in to "fix" some script problems. Maybe they should have let him proof the whole thing...  Also, I was disappointed with the 3D. They didn't use it right. There were so many opportunities to make the 3D amazing (rocks and lasers my way, please).  I don't want to be too negative though.  I thought the visuals were amazing.  I liked hearing about what Jane went through after Thor left the first time. I loved the after battle scene with everyone eating breakfast, because what else is there to do? There were good surprises and great actors.  Thor was a fun movie.

I loved Catching Fire as much this time as I did the first time. I wanted to re-read the book before I saw the movie. It's what I did with The Hunger Games. I don't know when I'm going to get a chance to see the movie though. Life's been so busy lately.

I'll keep my thoughts simple this second time. I really enjoyed Suzanne Collins' sequel. It was full of action. It entertained. The plot was more complex this time around. You get to see characters like Katniss's mother, Prim, Gale and others in a new light. What happened with Darius was so sad, the matching set that only serves to sadden Katniss. Catching Fire is a great book, the sequel to a series I often recommend. I'm excited to see the movie (soon!).

It's Been Four Weeks

It's been four weeks since I posted anything. I couldn't believe that when I looked at my last post. I don't know if I've ever gone that long without posting something on my blog.  I've been going through some changes.  I've been very emotional about it.  One of the first things to fall to the side was my blogs.  I think about it, I think about how long it's been since I put some kind of thought about anything up.  I have 9 drafts of posts that haven't been finished yet, that aren't even close!

The centre of all this is a new job.  I posted a while ago that my contract was ending at my old job and they weren't keeping me on.  I (luckily) found a job that started right away.  It's in the same industry, but different in what they want me to do.  I know they hired me for my industry experience and I'm grateful for not being unemployed.  This job is just a lot of work. A LOT.  Much more than my last job.  What I've lost is my work/life balance.  I'm learning to deal with the tiredness I now feel when I get home from the office.  It's mostly mental, but it seeps into my muscles.  I only seem to have the energy to take care of the kids.  Often, by the time they've gone to bed, I'm spent.  It's been a process of getting used to this and bringing my energy levels up, which I don't know if I've even accomplished that.

I almost didn't write about this absence.  I don't usually do one of those "I'm taking a break." posts.  If I don't have anything to say, I don't say anything.  But it's never been this long.  It's been a week, maybe two. I have still commented on other blogs, I've still tweeted.  My new job has blocked a lot of social media sites. Apparently it was a problem, but it seems to actually go against what my job does, as I think we need to go on Facebook, Twitter, etc., for actual, professional reasons. It was actually hindering my job one day, which is how I found out...  I digress.  What I want to say is that I'm going to try to be back.  I saw Thor, I read Horns and I've been obsessed with Sleepy Hollow.  I have started posts about all these things and more. I'd like to finish them, I'd like to get back to a happy work/life balance.  I think today is a start.
at 08:54:00 4 comments: