This was an incredible novel. I think I might actually be a better person for reading it. It’s finished and I still can’t put the book down. It was utterly fantastic. It almost made me cry and most books don’t do that. The touching way that Khaled Hosseini described the plight of the characters was captivating. It made me feel so angry and sad that people could be treated that way. Not just the women, the two main characters, Laila and Mariam. I was upset at the way men are raised and recruited into these “jihad” forces.

Not only is the book a look at the personal lives of these characters, but it is also an interesting look at the history of Afghanistan told by an Afghan. I could go on about the characters, what happens to them, the invasions, the bombs. I could talk about how each government changes, in the most basic ways, the way women are treated. I could even talk about the outrage at having men Laila considers warlords, become ministers in government. I won’t though. It’ll give away too much about this story and this story you need to read for yourselves. If there is one book that I put on my “must read” list, it’s this one. Everyone should experience A Thousand Splendid Suns.

*On a side note, after The Kite Runner, Khaled Hosseini’s first novel, he was appointed a goodwill envoy to UNHCR, the United Nations Refugee Agency. Check out his website for more information on him and the UN site for the current situation in Afghanistan and refugees around the world.
http://www.khaledhosseini.com/
http://www.unhcr.org/
at 11:06:00 2 comments:

I loved the first two movies. They were funny, interesting and full of surprises. I found some of that lacking in their latest installment. It was still a clever story with an unexpected end. There is definite growth in each of the characters, most noticeably in Linus Caldwell (Matt Damon) and Terry Benedict (Andy Garcia). I also loved the Oprah cameo. Yet, there was no mystery. There was no replaying of the story from the beginning, letting us know about all the secret things that happened; what the group did to fool their opponent. Worst of all, I found it slow paced. I kept waiting for the action to pop, but it didn’t happen. As much as I love the actors in this movie, I found Ocean’s Thirteen did not compare to its predecessors.
at 16:18:00 No comments:

What a fantastic film! It’s another of those movies I wished I saw sooner. The entire cast was amazing. There were several serious situations that were made, not necessarily lighthearted, but less dark and overwhelming. More than anything, I think it was about a [very dysfunctional] family coming together. The entire film built up to the end; to little Olive in her pageant and her final performance on stage. As much as the story was fraught with problems, it really does make you feel good once you reach the end.
at 15:51:00 No comments:

This is the third installment of Stephen King’s Dark Tower series. I have to say, I’ve enjoyed it every bit as much as the first two. Roland, Eddie, Susannah and Jake have come from different wheres and whens to create their own “fellowship.” There is a really love, familial bond, that has been created among these four strangers. Though one thing remains their ultimate goal, The Dark Tower and each would leave the other behind if it meant reaching this final destination.

I sat down and watched The Holiday this weekend. Sometimes you’re just in the mood for and unthinking romantic comedy. I’m a fan of Kate Winslet and I like Jack Black and Jude Law. I thought it was an interesting mix of personalities. I didn’t think Jack Black and Kate Winslet would ever play opposite each other, but in The Holiday they were a cute couple. In general, a cute movie. Not “super-cute” as some people have heard me say, but cute. The characters go through neat, predictable, personal changes, become more available to a “real” relationship and in the end, it’s happy. It’s a happy movie. I think the moral of the story is that if you can’t find love in your own country, go visit another! (Hahaha!)
at 10:54:00 No comments:

I hope I don’t give anything away

Everyone needs to go see Iron Man! It was fantastic! You don’t even notice the time go by. Robert Downey Jr. and Gwyneth Paltrow were awesome. I think they did an amazing job with casting. Robert Downey Jr. really captures Tony Stark’s philandering ways. He’s charming and extremely intelligent and it was translated wonderfully on screen. The only thing, regarding the cast, I wasn’t totally for was making Jarvis into a computer. He’s supposed to be the loyal butler. He takes care of Stark and eventually of the Avengers mansion as well. I suppose they’ll integrate that into the story whenever they get around to doing an Avengers movie. Maybe they didn’t want it to be too similar to Batman. Still, Iron Man is a hot, must see, action movie.

That’s another thing, to me, it’s an action movie. I loved every bit of it. The effects were amazing, the explosions were big, but it’s not a “comic book movie” the way Spiderman was. There are terrorists and men on fire and death scenes. Iron Man kills several terrorists who are holding people hostage. In the theatre, there were a lot of kids. There were kids, who I think, were too young to watch this movie. It’s violent, not all throughout, there’s a fair bit of humour to offset it, but I’m not sure I would take an seven-year-old to see this. It’s rated PG-13 and I would take that rating seriously.

But for all of you old enough to watch tanks blow up, Iron Man is a must see. 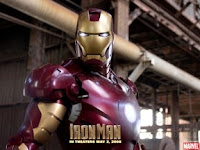 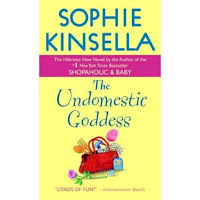 There’s no other way to begin this, except to say that The Undomestic Goddess was thoroughly entertaining. Sophie Kinsella has given us another character to love. Unlike the outrageous Becky Bloomwood, we have the indomitable Samantha Sweeting. Samantha is very responsible and career focused. Shopping is likely the last thing on this young woman’s mind. What happens to her is not her fault. She copes with the situation as best she can. Though she has a mini-breakdown, becoming The Undomestic Goddess is the best thing for her.

At first, one might get the impression that Sophie Kinsella (aka Madeleine Wickham) is advocating the domestic side of women versus the career driven. As funny and wonderfully entertaining as this novel is, at the heart of it, I think, is the search for balance. There are men and women both, who become obsessed by career. Samantha was only 29 and she was obsessed by work. She’s never had a real relationship and hadn’t been on a vacation in seven years. As Iris, the wise matron said, you only get your youth once. Do you really want to waste it in office buildings? Do you want to be the sort of person who doesn’t even bother to look out the window?

I think career is important. You need goals and a way to support yourself. Yet, you need to make sure that it’s something that’s going to make you happy in the long term. Fine, you want to be a lawyer, be “a full equity partner,” but you need to be sure that in this lies your happiness and future. Samantha never thought beyond making partner. She never though beyond work. In the end, she discovered that she wanted to look out windows and have weekends off. She wanted balance.