Everything’s Eventual is an amazing and varied collection.  I’m a fan of Stephen King (I might be obsessed with the Dark Tower), so I was confident that I would enjoy the collection of his short stories.  I more than enjoyed Everything’s Eventual.  I thought these were some amazing [not so short] short stories.  I have actually owned the collection for ages, picking it up during a sale, but some other book always drew my attention away, even other books by King (did I mention my possible Dark Tower obsession?)  I’m sorry I waited so long; though these stories were just what I needed to read right now. So maybe there was a purpose in waiting.

I’m going to do what I started doing with short story collections a few months ago.  As I read the stories, I wrote a few sentences, essentially containing my initial reaction.  I have, in the past done “Twitter sized” reviews, but since there are only 14 stories, I’m allowing myself more than 140 characters, but not too much.  An entire paragraph on each of 14 stories would make this one long post… though it’s not exactly shaping up to be a short one.

Autopsy Room Four is a great beginning to the collection.  It had me tense and feeling the main character's fear.  The ending was awesome.

The Man in the Black Suit

I like the tone of the story.  It wasn’t as tense or evoked as much fear as the first story did for me.  It did have a “tale told” sort of quality to it, if you know what I mean.

There’s a note* from King at the end of the story about where the inspiration for it came from.  There was a similar note at the end of Autopsy Room Four.  Am I going to find these notes at the end of each story?

All That You Love Will Be Carried Away

Great story.  Not a typical horror story, or a horror story at all, unless all you need for horror is potential suicide.  I really liked the ending and, according to the note at the end, it was a change suggested to King.  It definitely worked.

The Death Of Jack Hamilton

It's a sad story. You know how it's going to end; it's in the title, but hope for the best anyway.

I was rooting for Fletcher.  I thought King was going to go one way with the ending, but then he surprised me.  I liked being surprised.

The Little Sisters of Eluria

The Little Sisters of Eluria is not a short story.  It is 66 pages of Everything’s Eventual.  It is worth reading every page.  Maybe twice.  This story takes place in the world of King’s Dark Tower, before the first novel, The Gunslinger.  It was fantastic.  I believe I mentioned how much I love The Dark Tower series.  It was great getting to revisit that world.  If you’re a fan of that series, this story is worth the whole book.

The title story was exciting.  What struck me first was how much it reminded me of a place in the final Dark Tower book that the main characters travel too.  Dinky could have easily been one of the people there.  I liked Dink as a character, though he agreed to a lot of things I wouldn’t have.  I also like his final act at the end of the story.

This story is just sad.  Also, creepy because of the narrator’s tone towards the end.

The Road Virus Heads North is the type of story I think of when I think “Stephen King”.  It was scary, creepy and not to be read right before you go to bed!

Lunch At The Gotham Café 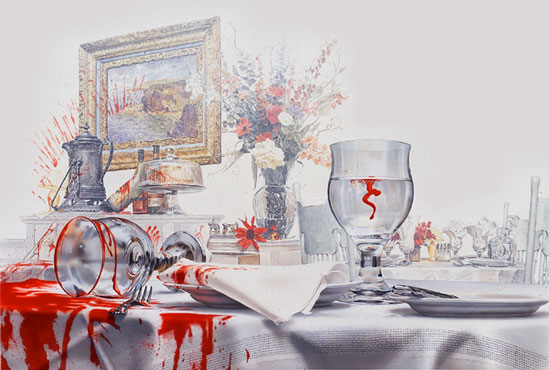 I wonder what Diane meant when she said he didn't save her life.  This was a crazy story.  I loved and hated the main characters (in a good way). Though, the story didn't leave me freaked out the way Road Virus did.

Also, the cover is from Lunch At The Gotham Café.  I didn’t realize until after I had finished the collection.  I was looking at the cover and in my head it clicked.  I was very excite.

That Feeling, You Can Only Say What It Is In French

Awkward title, amazing story. I'd like to think that the wife is making progress and they (she?) won't be stuck forever.  With every trip, she seems to be a bit more aware.

1408 might be the star of the whole collection**. It is scarier than all the other stories though there are still two more!)  Don't read it before going to sleep.  See full review for Short Story Monday here.

Another amazing story. It was tense and frightening. In the end, it was also sad. I could see Al's choice before he made it and I knew he would regret it. At least they had a few good years together.

This story had hope. It wasn't a scary story, like the last two.  It had cynicism and sweetness.  I really liked it.

I really enjoyed Everything's Eventual.  I think it's exciting that King could write something scary, yet humourous, like Autopsy Room Four, then produce something nightmarish, like The Road Virus Heads North.  While reading Everything’s Eventual, I didn’t know what kind of story I was getting.  Is it going to scare or is it going to mess with your head?  I enjoy the unexpected, most of the time, and definitely when I’m reading something by Stephen King.

*At first, the notes are at the end of the stories, then notes start showing up at the beginning.  I don’t think I like when the note is at the beginning of the story.  I don’t mind / gotten used to the explanations, but when it comes before, I feel like it tells me too much about what is going to happen.

**The other star, for me, is The Little Sisters of Eluria.  I’m not sure if I could pick a favourite between the two.