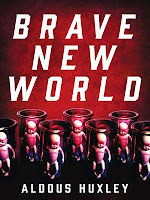 I can't believe that ending. I mean, I can, but I don't want to. Building up to the end, I was getting the same feeling I had when I was reading 1984 I just wanted things to work our for John. I wanted him to find his place in the world. I wanted John to escape and be happy. I was talking to my Hubby about the book, but I didn't want to tell him what made me so anxious and sad about the ending, in case he wanted to read it one day. He said that he didn't know if you could spoil a book that was almost 100 years old. I told him that I didn't know how it ended before I read it. I barely knew what it was about, not at all familiar with the plot. Of course, I'd heard the title many times, of course I had heard of Aldous Huxley, but I couldn't have told you what the book was about except it being dystopion. I didn't know about "Our Ford" or "decanting". I don't know how Brave New World flew under my radar for so long, but I'm glad I finally read it.

Who is the main character of Brave New World? I think it is the world itself. We look at the world through Lenina's eyes, a slightly quirky, but conforming woman. Bernard Marx, a misfit in his world. John "the Savage", an outsider, an experiment. I thought Lenina, being slightly eccentric for a woman of her cast, might break free and see things in a new way. I thought Bernard might learn some kind of truth and show others (possibly through Lenina, who is more accepted than he is). I thought John might teach this New World something, something about themselves, something that they've lost. Brave New World is brilliantly sad. Maybe I just want hopeful endings.

There were some parts of the novel I found strange. Firstly, how sexually free everyone is, "everyone belongs to everyone else". There is no more marriage, being with only one person for your whole life. The characters in the book talk about "having" each other. They talk to their friends about who they have and haven't had, if they've had the same person, what they thought about them, if they were "pneumatic". I thought this overt sexuality was strange for for a book written so long ago. After talking it through a bit, and reading more about Huxley, I realized why. It was written in 1931, the end of the Roaring Twenties. There was a growing freedom with sexuality (that was eventually stifled for a while). Huxley took this behaviour to the extreme, in a way that would contribute to the stability of Brave New World.

Though, we learn what happens to John, I'm left wonder about Bernard, Helmholtz, and Lenina. Does Lenina forget Bernard and John, and go on with her life, or does the experience change her. Where do Bernard and Helmholtz end up? Helmholtz requested going to the Falkland Islands, but is Bernard with him? Huxley later wrote a book called Island and I think it might be something I have to read. I hope to learn what happened to these characters after they were separated by Mustapha Mond.

As I was thinking about the story and writing this, I though about Lenina's character... then Aldous Huxley.... which led me to Lenina Huxley. I did not realize that the character, Lenina Huxley, played by Sandra Bulluck in Demolition Man was named for the character and author of Brave New World. Then I started to really think about it, about the Feelies and the headset that Lenina Huxley gives John Spartan to wear. How John Spartan is like John the Savage, coming into San Angeles and the "happy joy joy" lifestyle of contentment and conditioning. Maybe I'm a little late here, but I watched Demolition Man  way back in my early teens, long before I ever had a desire to read Brave New World and long before I would make these kind of connections. It's interesting how an action movie can be full of all these interesting ideas, getting a bit of inspiration from a book written in 1931.

I think Brave New World is worth a read. It's complex, but not long. It's also only $0.99 right now on iBooks, Kindle and Kobo. I'm glad I read it... and maybe I should re-watch Demolition Man too.